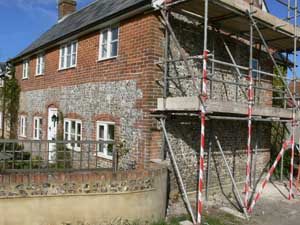 This was a beautiful grade 2 listed brick and flint house. The front elevation has square napped flints and the gable has more random sized flints. The issues here were that much of the gable had been rebuilt with sand and cement, and others areas had cracks filled with cement or some re-pointing with cement. The front of the house was similar. Our repairs concentrated on the gable. The front was basically repaired with lime where possible without making the job a very large rebuild. This can be addressed at a later stage once the cement starts to crack. The gable had most of the cement hacked out and re-pointed with lime. It was high time this repair was done as the water was washing the old lime mortar away on the sides of these cement repairs. We were able to match the old lime mortar by adding lots of chalk and coal.