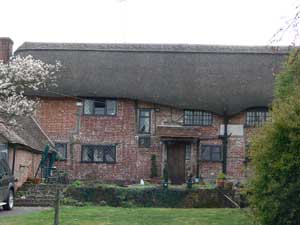 This was a classic timber framed house, Grade 2 listed. The bricks are between the oak timbers and had been covered with modern barrier paints. Between some timbers the old rendered laths were in place but these had been covered with a cement render. The gables were in old brick which had been repointed with cement. Our repairs started with sample brick repointing to the gable being approved by the conservation officer in Salisbury. The cement from the gable was then cleaned out, and the brick repointed in lime. The bricks on the front of the house were cleaned to 90% getting rid of most of the barrier paint and allowing the walls to breathe again. A partial repointing was also carried out to the front, and the cement render was removed from rendered laths and a lime render replaced it. The timbers, which had been covered in black paint, were cleaned to return them to the lovely oak colour. 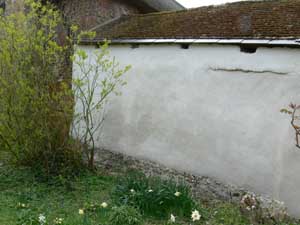 A side barn to the cottage had chalk cob walls. Here our repairs were to remove the cement render and replace it with a lime render. Large areas of the wall were repaired with cob blocks, the ground levels were reduced to uncover the plinth, and the plinth was pointed with new lime mortar.