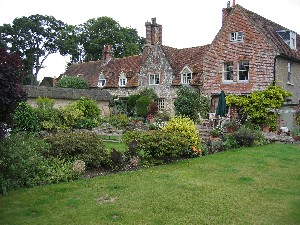 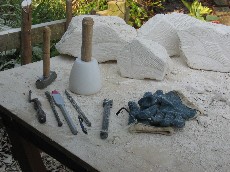 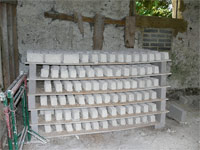 Sometimes repair involves chalk cob blocks or bricks. Here they are made on site in a barn. We also carry out total rebuilding using 'mass' or wet chalk cob rather than the pre-dried cob blocks. 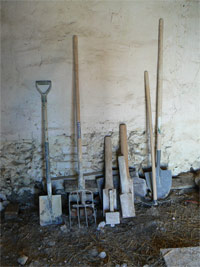 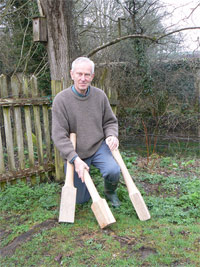 Here are some of our cobbing tools and a new set of 'thwackers' kindly made by Peter Sturt in our village with a donation going to the village church. 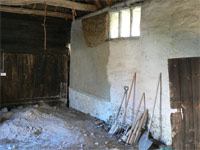 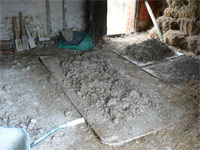 On the left you can see the cob wall which was rebuilt using mass cob and is now being lime rendered and on the right you can see how the mass cob is mixed; chalk, water and straw only. The cover of the barn made this an ideal cobbing location. 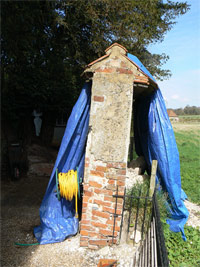 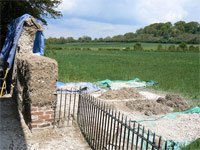 This cob wall had to be taken down and was rebuilt again using mass chalk cob as shown in the photos. 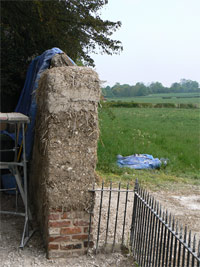 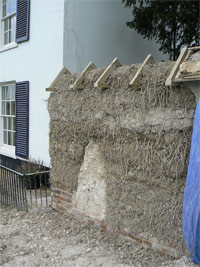 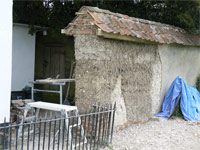 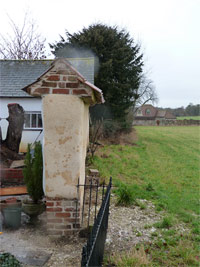 Above (right) is the finished wall on a rainy day. 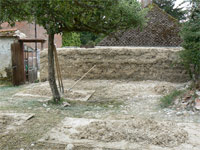 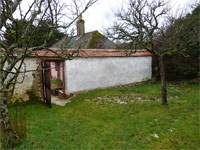 Here is another wall being rebuilt with mass cob. It was given a lime render and tiles to match the rest of the wall. 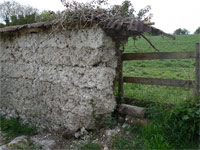 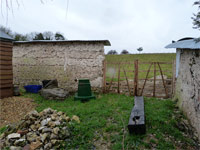 Here we have an unrendered wall in the new 'Wiltshire vernacular'. Our treatment is to reduce the ground levels to below the plinth and repair the plinth to give the wall stability. The next step is to repair the cob with cob infill and ties, fit a new tin roof, leave the gap in the wall to provide a view for the clients and then fill the gap with lovely gate hurdles made by a local woodsman. 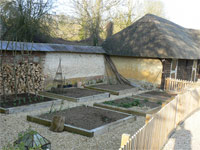 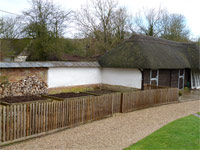 Here the cob was very worn due to previous cement render, this was removed, repairs done with cob bricks and finally a lime render applied. 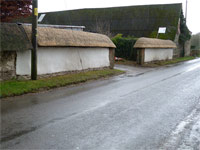 We do not often work in November but as it turned out the weather was mild...lucky. The ground levels were initially reduced to expose the plinths. This cob wall needed considerable work on the plinths and several cracks needed stitching or pinning and filling. It was given a lime render to provide some protection, especially from the splashes from a busy road, and finally a new thatch. 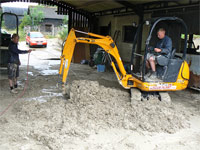 This project was a beautiful thatched chalk cob wall which had an individual grade 2 listing. Some 20 meters of wall had come down in the wind. The wall was special because the plinth was of sarsen stone and 24 inches wide, and the chalk cob was 3.5 meters high, one of the highest we have seen.

Hand mixing was not enough on this job and therefore we had to use diggers. 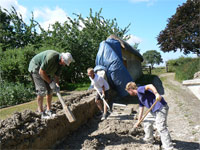 We are often asked if shutters are required? No, that was not the way these walls were built and so you can see that we build the cob up to the required height in lifts, with no shutters even up to 3.5m as they were built 200 years ago. 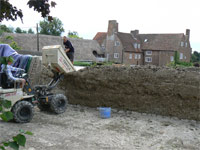 The dumper moves the cob from the barn to the wall and is very useful when the wall gets higher. 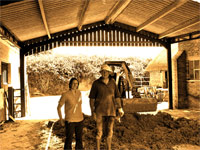 English Heritage made a visit from their London Offices, not just to see how the work was progressing but also to see if I could assist them with their aspirations to build three copies of Neolithic chalk cob houses at the new Stonehenge Visitors Centre. 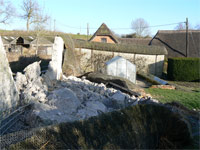 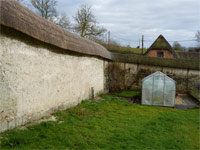 Here we have the fallen grade 2 listed wall again. Above right is the wall fully re-built and thatched. Below is a close up of the newly built cob over the Sarsen plinth. 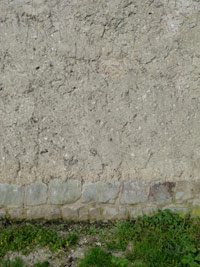 Several factors are of interest here on the conservation side. The wall had been rendered in the past but not recently , thus it was 'the new Wiltshire vernacular'. As there was about 180 meters of this wall we were keen not to insert a lime rendered smooth section, or render the whole wall. We reused the fallen cob and matched the cob wall in every detail. Given time it will age and darken in colour like the 200 year old original.